Because I've been at this writing / publishing thing since 2004, I sometimes forget that there are people out there who are new to it all.

On FB this morning, a woman was looking for help on one of the book pages I follow.  She's trying to get her daughter's novel published and had recently been contacted by a firm wanting to represent the book.  They were asking like 600-1000 pounds for different publication packages.  She'd tried to look them up online, but she could only find their site and links they'd put out about themselves.

Ding ding ding.  There are three reasons right there to walk away.

1)  Reputable companies do not contact writers out of the blue.  Real agents and publishers have too much going on to send letters out to unknown and untested and unpublished authors.

2)  Reputable companies to not charge to 'represent' you.  You may see charges if you're self-publishing through a vanity press, but they're not representing you.  They're doing the work to make your book a book - editing, covers, etc.  And even then, you have to watch them like a hawk.  Research the hell out of them to make sure you're not getting taken.  If this is a literary agent, which I suspect it is, you NEVER pay them.  They make money by getting a cut of your royalties after the book is published.

Someone in comments posted a link to Writer Beware. There's a good source for finding out about scammers.  And if you don't see the company on their site, I think you can contact them about it.

I commented with a shortened version of the above.  I hope she walks away.  She was smart enough to do some research and to ask about it online, so there's hope.  So many authors don't do the work and get taken for loads of money.  It always makes me sad to hear about another new author getting scammed.

I used to get crap like that in my inbox regularly.  I still get it, but it's fewer and farther between now.  Mark it as spam, go to the spam box, and delete it.  Do not engage.  Walk away.

Publishing is a long, hard road, fraught with potholes.  There is no easier path you can take.  No yellow brick road you can skip along to reach the Emerald City of publication.  And anyone who tells you they have a shortcut is a conman trying to fleece you.

Add book to all blog sidebars.

Add book to appropriate Outside the Box book page

Update back matter of all other books

Got anything on your checklist that's not on mine?

Email ThisBlogThis!Share to TwitterShare to FacebookShare to Pinterest
Labels: post-publication

In the midst of all this crap, I published a book.  Book number 14, to be exact.  Sure, it was delayed about a month because of the crap, but hey, it's out there in the world now.  The long awaited sequel to Sleeping Ugly is finally here... 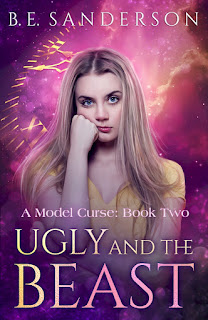 UGLY AND THE BEAST: A Model Curse, Book Two.

It's currently $2.99 (and available in Kindle Unlimited now)*.  And I put Sleeping Ugly down to 99c (or whatever comparable price that equates to in your country) and will leave it there until 5/31.  At which point, both books will go up to $3.99, so get your copies in the merry month of May.

Hopefully sometime this month, I'll have a better idea of when Cinder Ugly (A Model Curse: Book Three) will be released.

Thanks to everyone who helped, supported, and encouraged me through this process.  I couldn't have done it without you.  Literally.  Because without you guys, I would've continued to wallow in my uncertainty.  Thanks for kicking my butt.

*Due to a massive brain fart, it was not in KU when it first went live.  That has been rectified.  Read on, my friends.

Okay, so the possible delay has turned into a definite delay.  Sorry about that, folks.  My grasp exceeded my reach this time.  Don't despair, though.  It'll be done by Monday at the latest.

It's a good thing I'm doing this.  Man, am I finding a lot of typos that I unintentionally inserted as I was fixing other things.  Blerg.  On the bright side, they're getting gone, bit by bit.  As of last night, I had done through pg 146 of 231 pages.  And I'm fixing the errors in batches along the way, so I won't have to do them all when I finish reading, which will save time.

I'd be further along if I didn't blow Wednesday all to hell by going grocery shopping.  I was wiped out for the rest of the day there.  One thing I did get done Wednesday was the blurb - pre-shopping, of course.

Jeni Braxxon’s life as a up-and-coming supermodel hit the skids when she found herself cursed.  The asshole who did this to her is rotting in jail, but the curse remains, leaving her as ugly as the north end of a southbound warthog.  Every damn night.

As if this case of the gruesomes and her impending unemployment wasn’t enough for a gal with serious esteem issues, someone snatches her nephew.  The fight is on to find the boy before something seriously heinous happens.  With the help of her friends and a bit of beastly assistance, Jeni will face down anything this plane or the next throws at her.  If she’s lucky, she might just make it out alive.


And another thing I did was add a series title to the book covers.  I'm going with... drumroll... A Model Curse.  It was the only one I wrote down during brainstorming that didn't suck mightily and was short enough to fit on the covers without being super small. Succinct and cute.  At least, I think so.  It's pretty much set in stone now, so if you think it's lame, keep it to yourself, k?  (Set in stone because I'm tired of thinking about it and I don't want to have to redo the covers again.)

Right now, it's sitting at about 65K words.  That'll expand some as I put in front and back matter during formatting, but that's the meat of the story without the sauce.

Again, sorry about the delay.  I'd blame the chaos, but this last delay is on me.  I'll let y'all know when it goes live.  Until then, have a great day and an awesome weekend.  =o)
Posted by B.E. Sanderson at 5:52 AM 2 comments: