Umm, yeah, it was unexpected by everyone, including me, but PROJECT HERMES is on sale now through the 7th worldwide. 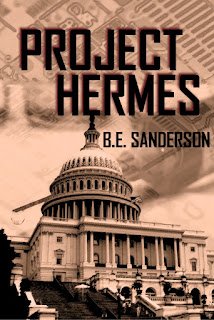 Well, it's officially been more than two months since I sold a book and nearly two months since anyone read any of my books in the KU program.  (Not counting the 30-something pages someone read last week because it wasn't a whole book.)

True, I haven't really done much to sell books.  And lord knows, I haven't been writing any books.  I did release a book in May, hence the sales two months ago.  (I didn't sell anything in April.)  I sold two copies of that book.  One of which was to myself.  Someone read the book in KU.  I marketed that book a little to the sound of crickets.  Book Two in a three book series when the third book hasn't been written yet is always a dud sale.

I'm not whining.  I'm just stating facts.  It is what it is.

I'd blame the virus, but bhis was not looking like a banner year for sales even before the 'rona arrived.  Last year, I released zero books, and while I did do a lot of marketing last year, I cleared very little above what I paid for advertising.  I have, perhaps, reached saturation with the current buying pool for newsletters I put ads in with the books I already have published.

Oh, I had plans to make this year better.  If I had stuck to my goals, I would already have two books published and be well on my way to completing another book.  If I hadn't been derailed, I might've been marketing.  Like I said, I got one book finished earlier in the year and published in early May - thanks to my friends who helped there and to those who bought and/or reviewed.

Right now, I can't seem to muster the will to do anything toward my publishing goals.  Looking ahead, things don't seem in a position to improve.  I keep telling myself this has to get better, but without anything to back that up, I'm just blowing smoke up my own ass.  I have to work to make it better and I'm just not in the mindset to do the work.

Whatever's happening in the world, that's on me.
Posted by B.E. Sanderson at 6:10 AM 2 comments: