Today begins the last sale in my rolling sale thing.  Early Grave is on sale for only 99c/99p now through next Tuesday.  If you've read Dying Embers and/or Fertile Ground, great.  Now's the time to pick this one up.  If you haven't read either one, that's okay.  This is standalone with only a little bit of dipping into the others for background and SCIU stuffs.  Since Ned Washington works out of the same office as Teri Buchanan from FG, and it runs alongside the plot of FG, there's a bit mentioned about that story in this one.  But you don't need to have read that to enjoy this. 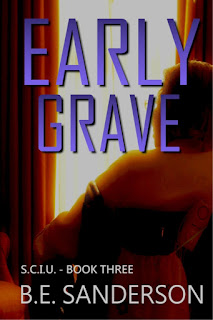 You're never too old to die.Nurse’s aide Tess Harper finds great joy in helping the elderly. If helping them into their graves a tad early is any sort of help at all. She’s not doing it out of the kindness of her heart. Tess is no angel, only a predator. And she has the perfect prey. Old people die all the time.Haunted by his own grandmother’s death, Agent Ned Washington finds himself embroiled in the hunt for a murderer. Dozens of old people have died but there was no kind and natural end for any of them. The hunt is on and Ned’s got a killer to stop before she sends more innocent victims to an early grave.

I'm sorry I haven't posted much over here so far this year.  It's supposed to be three days a week here and four over at The Writing Spectacle, but this blog is strictly for writing related stuffs and I just haven't been in the zone.

I've been working a bit on editing Duke Noble, PI: Rumor Has It.  Not a lot, but a bit.  I really need to pull my gumption out of the deep well it's been residing in, slough off all the goo, and get to work.

Anyway, here's the latest incarnation of the beginning of the story.

“Are you asking me kill you?”

I stared at the woman sitting across from me.  I hadn't seen her in years, but she looked as mentally sound as you or I.  Then again, a person doesn't have to be insane to want to end their own life.

Part of me wondered if her choice to come to me was due to my profession and the life I led.  I wasn't sure how much Sara Hughes knew about the things I'd done since those long ago days when she made me lemonade and tussled my hair before sending me off to play ball with her own kids.  A lot of people seemed to have the idea men in my line of work might be willing to do anything for the right price.  Murder included.

This seventy-year-old woman giggled and I could picture the girl she might've been.  Once, she'd been a close friend of my mother.  Hell, there were times when she'd been more of a mother to me than my own.

“Goodness, no, Duke." she said, breaking into my thoughts as she handed me a plate of Danish Windmill cookies.  They were my favorite.  Or at least they had been when I was ten.  I took the plate and set it on the coffee table between us without taking one.  I didn't have the stomach for eating.

“I want to hire you," she continued, "so you will, at the right time, insure none of my heirs are arrested for my murder.”

I shook my head.  “So, you're planning on paying someone else to kill you.”

"You sound offended I'd place the burden elsewhere.  Would you do it if I asked?"

FERTILE GROUND is On Sale 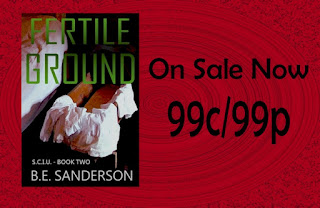 Adam Wyte is a serial rapist on a twisted mission. Agent Teri Buchanan is a rape survivor tasked with hunting him down and bringing him to justice. But when a rapist turns to murder and justice crosses paths with revenge, can Teri to do the right thing?
FERTILE GROUND - on sale now for only 99c/99p. (Always free with Kindle Unlimited.)
US: https://www.amazon.com/dp/B01FOPNE9Y
UK: https://www.amazon.co.uk/Fertile-Ground-S-C-I-U-Book-2-ebook/dp/B01FOPNE9Y
#suspense #ebooksale #Revenge #justice #99c #SerialCrime #sciu
Posted by B.E. Sanderson at 6:47 AM 3 comments:

Kind of a Cascading Sale Thing

Okay, so I totally forgot to post here on Wednesday.  Which is kinda stupid of me, since I had a sale start on Wednesday.  Oh, I did all the marketing posts to FB and MeWe, but not here.  Derp.

:shrug:  I'm trying something there.  Kind of a cascading sale thing.  Of course, I think the sales for FG and EG would be dependent on sales for DE, and so far it's been crickets for DE.  I'm not holding out a lot of hope.

In other news, I've been so wrapped up in preparing for and worrying about the weather (it's frigid now and they're predicting 3-9 inches of snow for next week), I haven't used much brain power to actually work.  That's my story and I'm sticking to it.  One would think because I'm stuck inside, it would be the perfect time to work.  Umm, nope.

Hopefully, now that we're as prepared as we're going to get, I can settle down and work.  I need to poke myself in the ass and just get it done.  Sheesh.

Yeah, I know it's not a day when I usually post here, but hey, it's good to shake things up a little every now and then.

Anyway, I finished the edit-note phase of Duke Noble: Rumor Has It.  (Still not sure about that title.)  I ended up with thirteen college-rule, notebook pages chocked full of notes.  Typically, it takes me about an hour to input a page of notes.  I'll start that today.  If I can squeeze three hours out of each day to edit, I'll be done by the end of the week.  However, the chances of me editing for three hours a day is slim.  I hate editing.

The saving grace of editing is that it's a step toward having this book published.  I love the thought of that.  Having this book out into your hands is the goal.  Editing moves me toward that goal.  Thus, I will edit.

Let me amend that slightly.  Having this book out - and worthy of being read by you - is the goal.  I could write THE END and shoot this sucker into space right now.  But it would suck and I can't do that to you.  You deserve better.  This book deserves better.  So, I edit.

And I bitch about editing.  Heh.  It's my process.

In case you're new here and haven't seen the process before, it goes like this:

1) Write the book.
2) Send the book to my Kindle and read through the whole thing while making notes in a notebook.
3) Input the notes
3) Repeat steps 2 & 3 until I feel it's ready to send to readers
4) Send to readers
5) Input notes from readers
6) Read through entire manuscript again, making notes if there are any
7) Input notes
8) Format for publication
9) Publish

The other day I had a gal who read Dying Embers ask me how long it takes me to get a book all the way through from start to publication.  If all goes well, I can complete steps 1-9 in three months.  Things rarely go as planned.  Lord knows, this book has taken longer.  I started writing DN in August.  In August and September, I got about 8000 words down and then the wheels fell off.  I restarted this in December, finished it 6 weeks later.  It took me two and half weeks to actually do this edit round.  It should roll faster now.  Good lord willin' and the creek don't rise.

I hope to have this into the hands of readers by the end of the month.  They'll take however long they take.  Once they're done, publication won't be too long after that.  End of March maybe?

I still have to make a cover.  Blerg.

So, Duke Noble will be born into the hands of readers soon.  Well, soon-ish... for varying definitions of soon.  Sooner than traditional publishing could make it happen.  =o)

Kicking My Own Ass, Yet Again

It's been a hard couple of weeks and I've been letting things overwhelm me when I should be working.  I know it's natural.  I also know it can become an excuse rather than a reason.

All in all, despite the grief and the changes and the fears of what lies ahead, things really haven't changed that much here at Sanderson Publishing (a wholly-owned subsidiary of Sanderson, Inc. LLC*.)  I still have a computer to write on and internet access to communicate with the outside world.  My brain still works and so do my fingers.

So, yesterday I took myself in hand.  I didn't make huge strides into the editing, but it was a start.

Also, I'm thinking about a sale.  My 6-year anniversary for publishing is coming up on the 13th, so that's cause for celebration.  It would be a nice time to market something.  I'll let you know what I decide.

I have to do better.  I cannot wallow in my misery or let outside stuff live rent-free in my head to the point where the work isn't getting done.

Consider this a personal ass-kicking.  And expect to see more writerly work out of me from here on out.  Feel free to jump on the ass-kicking bandwagon if you don't.

*Not a real company, folks.  It's just me and Hubs.  But I like to joke about being a company.