First, thank you all for being here!

Second, here's the dealy-bob.  Since I'm making my foray into self-publishing after the start of 2015, I'd like you all to be following me when the event happens, so you get the most updated information the fastest.  So, to that end, I'm having a contest.  The prize for this contest is a kringle from O & H Danish Bakery in Racine, WI.  What's a kringle, you say?  Well, since I'm launching the book currently known as Dying Embers first, I'll let this unedited snippet from it explain:

Dawn was breaking over Lake Michigan by the time they reached Racine.  Still too early to make any headway with their investigation, the two weary travelers rented a car and trolled the city looking for the first real meal either of them had eaten in almost twenty-four hours.


“An associate sent me the best pastry I ever ate, and if I remember correctly, it was made here in Racine.  Look for any place advertising something called a kringle.”


Ben cast a sideways glance at her.  “As in Kris?  This isn’t one of those Christmas towns is it?”


She laughed, and she liked the sound.  The last man who’d made her laugh that hard…  Well, she couldn’t remember one, it’d been so long.  “Not as far as I know.  It’s some kind of Danish delicacy.  Just trust me, and keep your eyes peeled.”


Not another block went by before he pulled the car into a parking space along the road.  “Mademoiselle asks and she receives.”  He pointed one well muscled hand toward the sign above them.


After sitting down with a couple large slices of the buttery, gooey treat, they ate in companionable silence punctuated only by the groan from them both when they finished too soon.


“You were right.  Those things are incredible.”  He patted his stomach.  “Good thing I don’t live around here.  I’d ruin my girlish figure.”


She couldn’t imagine him ever having a girlish figure.  Not exactly the expanding waistlines of many men his age, he still had enough meat on his bones to keep from blowing away in the wind.  Broad and well-proportioned was more like it, and exactly what Jace would’ve enjoyed getting to know, if this wasn’t business.


And here's a picture of what I consider a slice of heaven, if you need more encouragement: 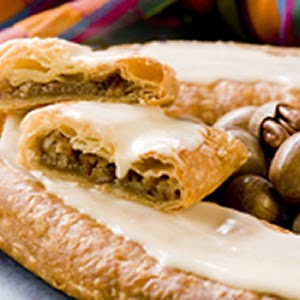 So, for your opportunity to eat like Jace and Ben, all you have to do is follow this blog.  Here's how it'll go down:

1) If you followed this blog before I woke up the morning this posted (follow early, follow often), you already have two entries.
2) If you also followed The Writing Spectacle before this post went live, you have another two entries.
3) Anyone who follows this blog from this point until the end of the contest, gets another entry.
4) Anyone who follows The Writing Spectacle from this point until the end of the contest, gets another entry.
5) If you comment on this blog post, you get an additional two entries. (For those people who don't use Blogger, comment here and then go ahead and 'follow' anyway.  Even if you never see it through Blogger, it can't hurt anything.)
6) Look for an additional chance to gain entries sometime between now and the end of the contest.
7) The contest ends when I get online in the morning on December 1st, 2014.  Anyone who is following my blog at that time gets to be in this contest, and will have an advantage over new followers in the next contest.  (Dates and prizes for that to be determined - depending on how this contest goes.)

And stay tuned because I'll be doing other cool things (I hope - I'm tragically un-cool) in the weeks and months to come.

Thanks again for stopping by.  I look forward to seeing you around.

I am not affiliated with O & H Danish Bakery in any way, so don't bug those folks about this contest.  They won't have a clue. They have no idea who I am and I've never even been to Racine, WI.  I just love kringles and the best ones I ever ate came from this place. Like Jace, I used to have an associate who would send these out.  I really miss doing business with those people.

The kringle prize is available to continental U.S. residents only.  (I can't afford the extra shipping on these suckers yet.  Maybe after I sell some books.) And you should probably have a non-P.O. Box address - because these glorious circles of goodness need to stay fresh and who knows how often you check your P.O. Box.  If you only have a P.O. Box, we'll work something out.

If your name is drawn and you're not in the continental U.S., I'll find an alternate prize - like a gift card or something - to award you.  We'll work it out somehow so you get a prize and I don't have to break the piggy-bank open.