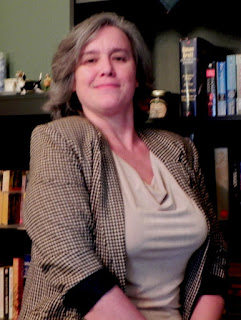 It all started in a little town in mid-Michigan...

Wait, let's not go back that far.

I'm not one of those writers who'll tell you they've been writing all their life.  (Although, I distinctly remember trying to 'write' Robinson Crusoe by copying it word for word with my little hands when I was like 4.)  :cue awww:  It's cute, but it doesn't count.

I also did a little collaboration work with my best friend when we were about 14.  She had a story she was writing longhand, and one sleepover, I helped her work on it, and then over the course of months, I took the project over, typing on it faithfully with my grandmother's mint green manual typewriter and numerous packs of Erasable Bond paper.  I have that laying around here somewhere - her notes, and my notes, and the typed pages all nestled in a baby-blue folder.  Still doesn't quite count - unless you mean it taught me a lot about typing.

Over the course of the next twenty years, I made several false starts.  I have several unfinished romances I've saved from floppy to diskette to hard drive to CD.  One of them I can never open because it's in an old version of Lotus Notes and no program I've tried has been able to convert it.  All of that is interesting, but not the real crux of me as a writer.

In January of 2004, I watched the movie Armageddon.  Afterwards, as I was trying to sleep, the idea for a book leapt into my head and wouldn't leave me alone.  I got up and turned my computer back on, and furiously wrote what would become a real chapter.  By August of that year, I wrote THE END on the first draft of my first novel - The Comet.  After a ton of edits and a boatload of rejection letters, the book I then referred to as The Spectacle, would become the final draft* of Fear Itself.

Since then I've written numerous other novels to completion, and have several others in varying states of 'finished'.  I gave up on the romance idea, though, and my novels can best be classified by the genres: Suspense/Mystery/Thriller, Paranormal/Urban Fantasy, and Speculative Fiction.

Basically, in 2004, I went from being the Executive Secretary to the President (try fitting that on a business card) of a private regional school system and a single mom to being a housewife, stay at home mom, writer person who worked whenever she found the time and the inclination. From then to now, I wrote, edited, polished, submitted, queried, and found myself rejected so many times I lost the will to keep track. Now my daughter is grown, my husband is retired, and I am doing my damnedest to turn this writing thing into a business by self-publishing.


So here I sit, hermit-like, in my cabin in the woods with the Hubs and our cat, banging away at the keyboard, teaching myself the business, and hanging out on the internet  Sometimes I go fishing.  Generally, I enjoy myself and I enjoy life.  I hope you'll join me on this journey and that you enjoy yourself, too.


*There's never really a final draft to any book until it's published, and even then, it's iffy.